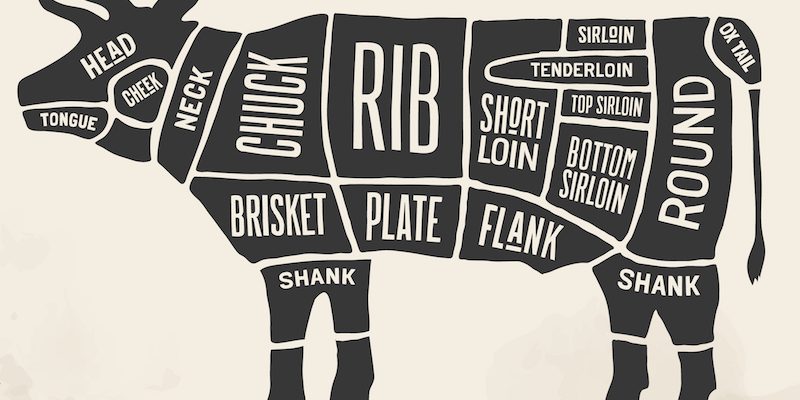 The Best Cuts of Meat for Barbecuing

With Australia day coming up and the awesome summer weather this January, it’s perfect for an outdoor BBQ. In this, we share some of the best cuts of meat for barbecuing and tips to get the best out of them.

Fillet/tenderloin: It exists beneath the ribs and next to the backbone. The tenderloin is, as its name implies, the most tender cut of beef. Those who do not prefer the marbling of the ribeye and strip loin will thoroughly enjoy the tenderloin.

Rib eye/Scotch Fillet: you can have it as a thick steak or nice and thin and turn it into steak sandwiches with onions. It has a little bit more fat and a bit more flavour, it’s always nice & tender.

Sirloin/Porterhouse: The top sirloin cut is a rarer cut of meat to find as it’s usually already sectioned into steaks.

T-Bone: This large piece of loin steak has a T-shaped bone and little to no fat which makes it perfect for the BBQ.

Rump: The beef rump is cut from the hindquarter and is a boneless piece of beef that covers the hip bone of the animal. It is a great full-flavoured piece of beef.

Spare Ribs: Simmer beef ribs, drain excess water and add a delicious marinade the day before cooking them on the BBQ.

Sausages: Make it quintessentially Aussie and serve with bush tomato and mountain pepper leaf, or if you’re after more Asian-influenced flavours, you can have Thai Beef Coconut Curry Sausages. Don’t have the barbecue too hot because the skin goes all crispy and burnt. Don’t pierce the snag before it goes on the barbeque, if it does explode it means the sausage has too high a fat content. If it’s a good sausage, you shouldn’t have to pierce it.

Pork Chops: Thick or thin, bone-in or bone-less pork chops are cut from the meat perpendicular to the spine, often from the loin. Pork chops from the shoulder end are fattier than from the loin end.  If you have chops from the shoulder end, lower, longer grill cooking is needed. This way, you can you render all the fat. Pork fat is super delicious, but if its not rendered all the way through, it doesn’t have a good texture and the flavour isn’t as good.

Pork Fillet: The fillet or tenderloin is a long thin muscle, found on the inside of the ribcage and is a part of the loin cut. Pork fillet is the leanest of all cuts, so it’s the healthiest choice. Marinate or tenderise the fillet, then cook it quickly at a high temperature until slightly blushing pink in the middle for extra-juicy results. Cooking it for too long will dry the meat out – and always remember to rest the fillet after cooking to seal in the moisture.

Pork Ribs: People say that ribs are the holy grail of barbecuing. They say that once you have mastered the art of barbecuing ribs, you can almost cook anything on the grill to perfection. Well, that may be true because this part of the pig requires a lot of patience and skills. It cannot be rushed but rather grilled slowly so that it will get evenly cooked not only on the outside but also on the inside. The recommended grilling time for this cut is approximately 90 minutes, keeping in mind that it should never be taken off the grill in less than 40.

Take your lamb out an hour before you plan to cook it so it can come to room temperature, give it a rub with some good olive oil and don’t get distracted. It’s a barbie, not a cremation

Loin: Lean, tender and flavourful, loin chops contain part of the backbone and resemble a T-bone steak. The muscles include the eye of the loin and a piece of tenderloin. Although they are relatively pricey, they’re also the leanest and most tender chops on the lamb. They are are best when they’re cut thick and cooked hot, dry and fast.

Chicken Breast: Chicken breast must be the most versatile meat.  It is a white meat with very little fat and it is the perfect cut to slice up and cook straight on the BBQ.

Thigh: Chicken thighs can be bought as thigh fillets with skin and bone removed, or thigh cutlets, with bone and skin still attached. Chicken thigh meat is brown and has a little more fat then the breast, but also slightly more flavour. The can be used on the barbecue or char-grill.