The consequences of improper food handling 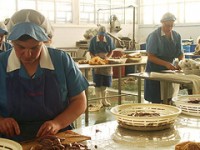 Whether it’s at home or within the work environment, proper food handling is important.

Excessive bacterial growth and cross contamination are two of the main problems that can occur due to poor food handling. Bacterial growth can result from certain foods being left out in the heat too long (e.g. meats), improperly cooking, not consuming foods before the ‘use by’ date, and so on. Cross contamination, of course, occurs when you contaminate foods with either other foods or products. A basic example would be cutting up raw meat on a cutting board, and then cutting up vegetables on the same board without first thoroughly cleaning said board. Another example could be preparing food on a surface that was recently sprayed with insecticides.

These two are unfortunately common if food isn’t handled properly. And more often than not, these two factors typically lead to some of the following, more substantial issues…

Without a doubt, food poisoning is the one of the key consequences that comes from improper food handling. It could be the food not being properly cooked (or at the right serving temperature), food left to defrost too long, food being handled with unclean hands, cross contamination, and so on. As mention, many of the poor food handling practices that allow for bacterial growth and cross contamination will also be the same practices that lead to food poisoning.

Food poisoning is the worst consequence that can come from improper food handling, given that it can lead to death in severe cases. On the professional front (restaurants, diners, etc.), this can lead to further consequences. If any of your food is handled improperly – be it in storage, preparation or cooking – and someone falls ill (or worse), then it could lead to any of the following scenarios:

While you may think some of these could be unlikely, these are some of the very real – and often very likely – consequences that can result if your business is found responsible for causing food poisoning due to improper food handling.