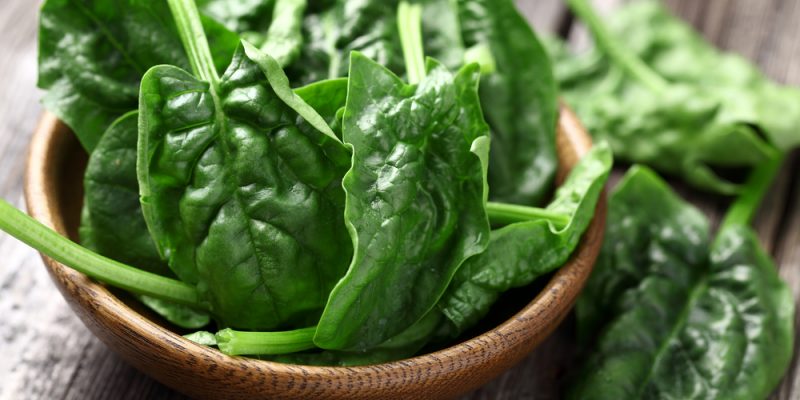 The Health Benefits of Spinach

Those who remember Popeye will know exactly what his vegetable of choice was – spinach. The green, leafy vegetable became the symbol of health and strength. But cartoons aside, what are the real health benefits of spinach?

Spinach is in season all year round in Australia, so you don’t have to worry about finding it in your local supermarket. It grows best in a cool climate and is fairly resistant to frost, so autumn is the peak time for sowing. There are many different varieties, including English spinach, baby leaf, and savoy spinach.
The baby leaf variety of spinach has grown in popularity in recent years, with many people adding it raw to salads. Baby leaf has a very quick growing time, it can be ready to harvest in about 6-7 weeks.

Getting the most out of spinach

Selection – Spinach is often confused for silverbeet, but spinach has a smaller, flatter leaf and green veins, as opposed to the white veins of silverbeet. Fresh spinach should be medium to dark green, fresh-looking and free from evidence of decay.

Storing – Spinach is best stored loosely packed in a sealed plastic bag in the fridge. You can store it for about 4 days. It’s best not to wash spinach before storing as the added moisture can cause it to spoil.

Preparing – Wash spinach thoroughly before eating, particularly if bought in a bunch. You can also buy frozen spinach, which is a nice alternative to frozen peas. It comes in blocks, all you have to do is thaw it and drain out excess water if required.

Cooking – Raw spinach has a milder taste that some describe as metallic once cooked. You can eat it raw in salads, atop pizzas, in sandwiches and wraps, and in smoothies. If cooking, it’s best to steam, sauté or microwave spinach rather than boiling to preserve the nutrients.

And don’t be afraid about adding lots of spinach when cooking. The high water content means that it reduces in size by about a quarter when it cooks down.